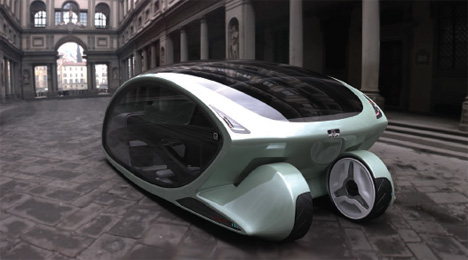 Automotive industrial designers have been getting quite creative with their ideas in the last decade or so; many of them are tending toward alternative energy vehicles, alternative propulsion systems, and even entirely alien configurations for the interiors of the vehicles. But this futuristic Peugeot concept from Roman Mistiuk combines all of those changes into one radically different concept. It’s a car, but it’s also an extension of an urban apartment home.

The Metromorph design aims to combat the lack of parking space in densely-populated metropolitan areas. It functions just like a normal car when on the streets, with motors in two of the body-concealed wheels. But when the driver arrives at his apartment building, the car uses a track system to transform into a vertical elevator that takes the driver to the appropriate level of the building. The interior seats move and rotate as the car’s orientation changes from horizontal to vertical. 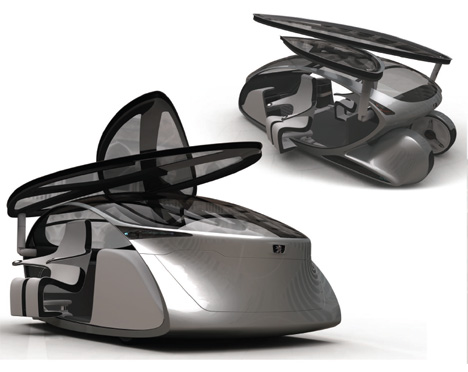 The car then takes the driver and passenger directly to the dock on the outside of the appropriate apartment, and then remains there as a sort of balcony. If the driver needs to park in a traditional parking lot, the scissor doors open in a sort of bug-wing pattern, above the car’s body, allowing the driver to park in very small spaces.

While it’s a gorgeous and very forward-thinking design, we can’t help but wonder what would happen to all of the Red Bull cans and random trash we have on the floor of our cars now when the car hits vertical mode. The people of the future will have to be much tidier than today’s drivers. If the Metromorph design seems familiar, it’s very similar to the horizontal/vertical MAG-LEV transportation system in the movie Minority Report. The movie’s car, however, was a Lexus – clearly different than the Peugeot Metromorph.

See more in Industrial Design or under Technology. January, 2010.