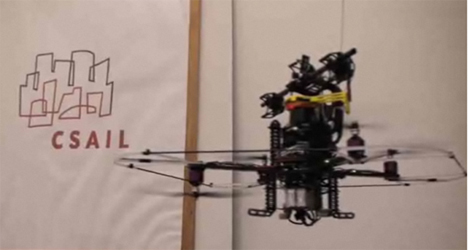 Unmanned aerial vehicles, or UAVs, are often used to explore areas unsuitable or unsafe for humans. They’ve proven invaluable in military reconnaissance, as well as search and rescue missions. But the problem with UAVs is that they typically find their way around with GPS. And the problem with GPS is that it doesn’t work indoors. So, without a map of the indoor space, the UAV is effectively flying blind. A group of MIT students (the MIT MAV team) tackled this problem and made an autonomous, quad-rotor indoor helicopter that actively senses its surroundings with an integrated laser.

The laser mapping performed by the helicopter is truly impressive. It creates a rough 3D map of its immediate surroundings in real time to identify obstacles, passageways, and its target object. It can “see” a window barely wider than the helicopter itself and maneuver through it safely. The helicopter was entered into the 2009 AUVSI National Aerial Robotics Competition. It was the first robot to successfully complete the entire challenge in the competition’s 19-year history.

See more in Robotics or under Technology. October, 2009.