Many of us played with “spy” cameras when we were kids, but not all of us know just how long these tiny hidden cameras have been popular. These three cameras disguised as pocket watches were all built in the late 19th and early 20th centuries, meaning that photography enthusiasts have been happily snapping secret shots for a very long time.

The Lancaster Pocket Watch Camera was made in 1886, making it one of the oldest examples in the world. The particular model pictured here was the ladies’ version and was only produced for four years. It was quite difficult to use, requiring the user to undo four latches and remove the glass, then place a new metal material holder for each exposure. It did not sell well, and today only four are known to still exist. 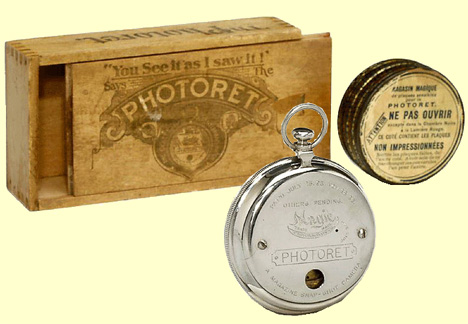 The Photoret Watch Camera was made in 1893 by the Magic Introduction Company. For an original cost of $2.50, the little spy camera could take six exposures before it required reloading. Its rotary shutter could be held open by inserting a straight pin into the small hole on the camera’s front, allowing for time exposures. 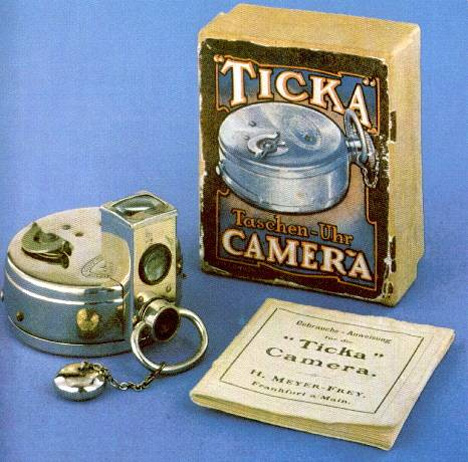 The Ticka was produced by Houghton in London from 1906. While some versions of the Ticka were solely pocket watch-sized cameras, others (like the picture with the red background at the top of the page) featured a faux clock face with the hands set permanently at 10:07. This hand position indicated the viewing angle that made it possible to take pictures with the Flicka without the aid of a viewfinder.

See more in History of Tech or under Vintage & Retro. February, 2013.