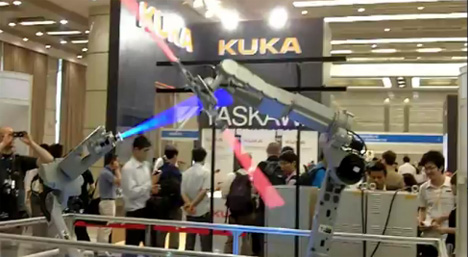 It’s a poorly-kept secret that robots and light sabers are two of our favorite things – and combining them is a sure way to be featured on Gajitz. Yaskawa, a company that manufactures servos and other useful things, put two robots into an arena, gave them both light sabers, and had them fight…kind of.

So there are no nail-biting moments and overall it’s not a thrilling fight, but come on – it’s still two robots engaged in a light saber battle. We don’t get to see that very often, so we’ll take what we can get.