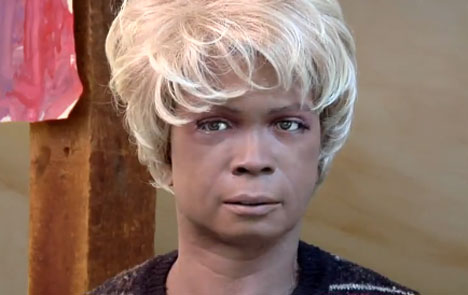 The quest for artificial intelligence has led mankind to some pretty strange places, but the Terasem Movement has just taken it to a decidedly creepy new level. The non-profit agency is dedicated to educating the public about the necessity of extending life through cyber-consciousness. In other words, they believe that the human essence can be extended beyond life with the use of robots.

They created this vaguely creepy robot called Bina48. The bot is the first privately-funded artificial intelligence robot of its type, and it’s modeled on a real woman named Bina Rothblatt. The real Bina spent many hours loading information into the head of Bina48, giving “her” a personality and the ability to converse with visitors. The above video documents Bina48’s interview with a New York Times reporter; it’s apparent that the technology can use a little refinement before we can trust it to store our consciousness after we die. But if its heartbreaking desires to have its own life, work in the garden and take over the world are any indication, we’d better start welcoming our new artificially intelligent overlords now.

See more in Robotics or under Technology. July, 2010.