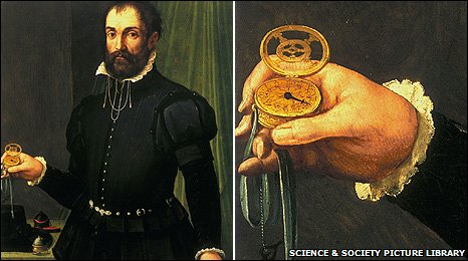 Mechanical pocket watches were invented in the 16th century, and eventually they worked their way into the everyday lives of wealthy people and commoners alike. But this month, historians think they may have identified the first artistic depiction of a watch. The painting, above, is from around 1560 and was painted by Renaissance master Maso de San Friano. It was donated to the Uffizi Gallery in Florence, Italy some 33 years ago and sat in storage until recently. When it was hauled out of storage, curators performed some research and realized that the watch in the painting, depicted as being held by the Duke of Florence Cosimo I de Medici, was probably the oldest such depiction. The painting now hangs in the Measuring Time gallery in the Science Museum in South Kensington, London. 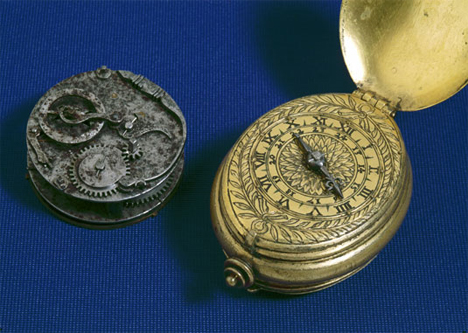 Also in the Measuring Time exhibit are this German watch movement and complete watch, both from the 16th century. The watch movement is from the earlier part of the 1500s and is probably very similar to what is inside the watch depicted above. At that time, watch components were made mostly of steel; various work-arounds were incorporated into the imperfect design to make time-keeping more accurate. When Cosimi I de Medici posed proudly with his golden timepiece, he was literally holding a piece of technology history right in his hand.