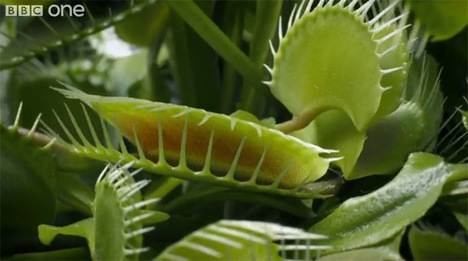 Life is a visually stunning and sometimes heart-wrenching series produced by the BBC and shot entirely in HD. It shows the particular mechanisms that plants and animals have developed in order to survive. It’s honest and brutal, but full of the touching beauty that pervades everything in nature. This particular clip of Venus flytraps growing to maturity and devouring their prey, however, is low on the beautiful and chock full of nature’s brutality. 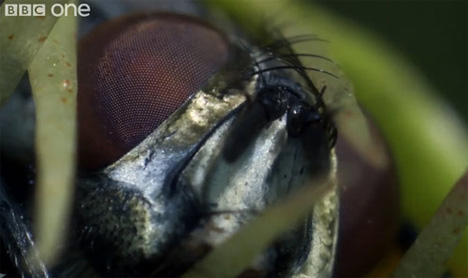 The short segment (which can’t be embedded due to the BBC’s request) shows in shocking detail the jaw-like leaves of the Venus flytrap developing over a period of two to three weeks via time-lapse. Then, when the plants are mature, an ill-fated fly lands to taste the sweet nectar excreted by the leaves. Once the fly triggers two of the interior hairs within 20 seconds, the jaws clamp shut, sealing the fly’s fate. You may not enjoy this if you have a weak stomach (or affinity for the common fly – its dying squeaks are artificial, but heartbreaking) but it’s an incredible raw look at this amazing carnivorous plant. Watch the clip here on YouTube.