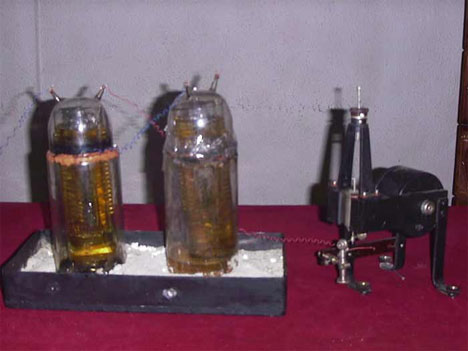 In the post-holiday glow, almost everyone with kids starts cursing the very idea of batteries: the expensive, quick-draining little power-providers that always manage to die way sooner than they’re supposed to. But you wouldn’t be complaining if you could get your hands on this contraption. It’s called Karpen’s Pile, and some people believe it to be the closest thing to a perpetual motion machine the world has ever seen. Slightly less idealistic people call it a battery that has been producing energy continuously for more than 60 years.

Details about the device are sketchy at best and smack of a hoax at the worst. The inventor of the mysterious battery was Romanian engineer Nicolae Vasilescu-Karpen, who is said to have patented the idea in 1922 and built this working model in 1950. One of the battery’s electrodes is gold and the other is platinum; the electrolyte is sulfuric acid. And to prove that the device is indeed producing power, the battery is hooked up to a small motor that rotates a blade. The movement of the blade may very well be charging the battery with every turn – but reportedly, scientists aren’t really sure how the battery is still producing power. According to those who now study Karpen’s work, the battery breaks the second law of thermodynamics. This would be revolutionary to the entire physics world, which is why it’s hard to believe that something like this has been kept so quiet for such a long time. But perhaps we will soon get a chance to learn more about this maybe-groundbreaking battery: a Romanian technology museum wants to put it on display.

See more in Antique Gadgets or under Vintage & Retro. January, 2011.