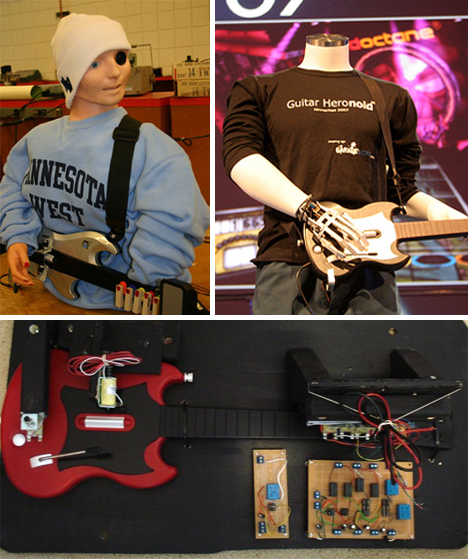 Since Guitar Hero made its way into homes in 2005, gamers have spent countless millions of hours working their little fingers to the bone and perfecting every song. But what do you do when you get sick of playing the same songs on “expert” and never mastering them? You build a robot to do it for you, of course. There’s something slightly sad about robots playing games of skill for us, but…well, some people are good at pressing colored buttons at the appropriate time, and some people are good at building robots. You work with what you have. 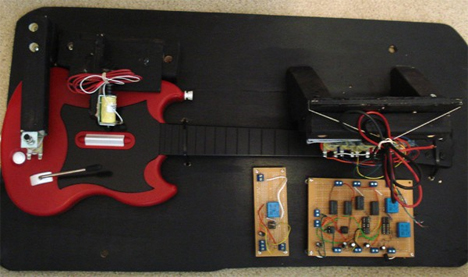 “Slashbot,” made by a group of four students at Texas A&M University, was originally a project for an Electrical Engineering class. What it became was sort of a big deal around the interwebs. The “brain” of Slashbot consists of a converter which recognizes pixel brightness on the screen and transforms it into “finger” presses. The “body” consists of a solenoid actuator that takes the signals from the “brain” and presses the appropriate buttons on the controller. It manages about a 90 percent accuracy, which is a whole lot better than us, even pre-beers. 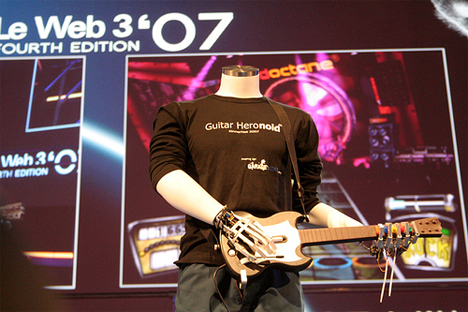 Although it’s creepily missing a head, what Guitar Heronoid does have is mad Guitar Hero skills. Constructed by Rafael Mizrahi and Tal Chalozin of Garage Geeks, the human-shaped bot uses a bot-to-computer feed to processes video from the game screen, then uses an analysis of light and dark pixels to tell the “fingers” when to move. The team is continually building improvements to the robot, using their considerable tech skills to make it better, smarter and faster. 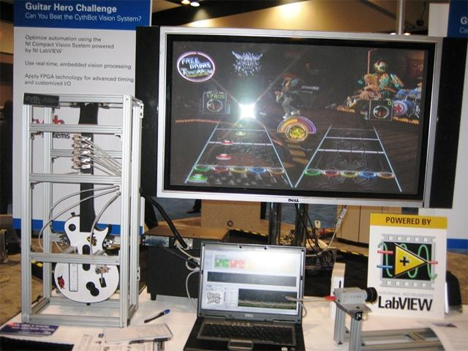 Like the above Guitar Hero robots, the Cythbot analyzes pixels on the screen and tells the moving parts when to move. But unlike the other projects, this one wasn’t made by amateurs. It was put together by Cyth Systems, a California engineering firm, to display their expertise in integrating different systems. It may not be pretty, but it can hit up to 98 percent accuracy (with its average being 75-80%). 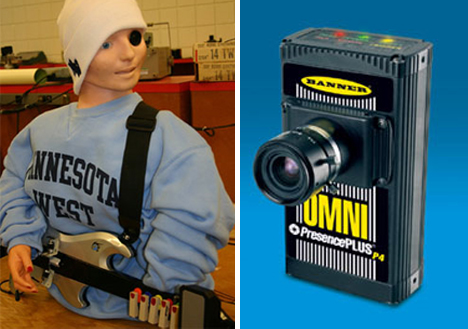 Roxanne, the Guitar Hero-playing robot built by Minnesota West engineering student Pete Nikrin, may be the most attractive yet creepy of all of these projects. Roxanne is built from a mannequin fitted with a PresencePlus P4 OMNI vision sensor in the left eye. Nikrin and his robotics instructor, Bill Manor, worked closely with the sensor’s manufacturer, Banner Engineering, to make sure the robot’s processing time could keep up with the fast pace of the game. The understandably complicated programming all paid off when Roxanne started playing; she can hit up to 100% accuracy on “medium” mode and averages around 98 percent. On “hard” and “expert” modes, she can achieve up to 95 and 80 percent, respectively. Although Nikrin has since moved on from Minnesota West, Roxanne stays on to entertain and educate new and prospective students.