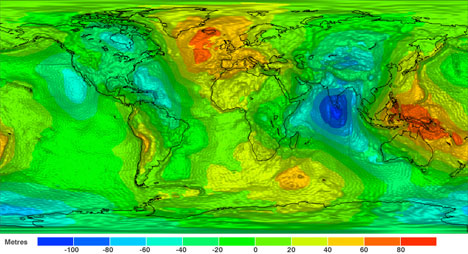 This map may be one of the most amazing and unique images ever created of Earth. Using just two months of data, a gravity-measuring satellite made the first map of Earth’s gravitational field. It’s a surprising and beautiful image of a force that we would never expect to be able to see – and yes, different places on Earth experience different gravitational pulls. The map is technically known as a geoid, and it was created by the satellite known as GOCE: Gravity field and steady-state Ocean Circulation Explorer. The satellite takes precise measurements of the Earth’s gravitational field from an orbit so low that it nearly falls out of the sky.

The geoid is basically a level which measures even the smallest changes in the Earth’s gravitational field. The resulting map is what the oceans would look like if there were no tides, no current, no wind and no temperature changes. Because of this, the geoid will be useful to oceanographers who are studying the effects of those factors on the world’s oceans. But it can also be used for a huge number of other applications, including predicting volcanoes and earthquakes, assisting engineers who are designing buildings, and simply gaining a better understanding of our planet’s gravity. The ESA expects that the satellite will be able to continue its mission until at least 2014.