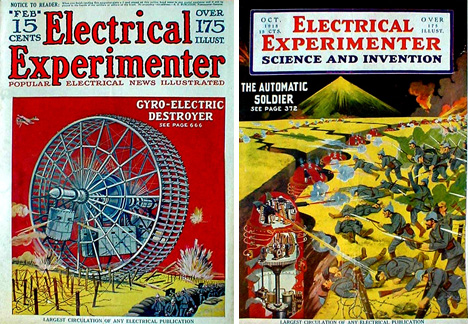 The first half of the 20th century was an unsure time for much of the world, with wars and political unrest causing fear and uncertainty all around the globe. It’s not surprising that many of the predictions for the future at that time had to do with military and weapons advances. Many predictions, like the above giant, rolling hamster wheel of death and stationary gun turrets that could swivel side to side but apparently not up and down, were completely ludicrous. 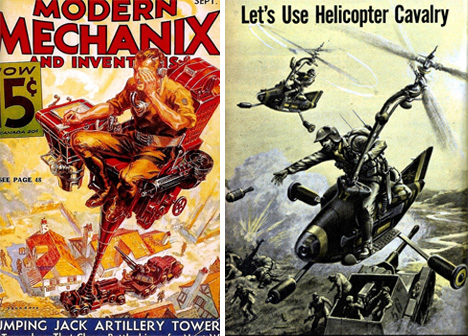 And others were even more silly than that. The two above predictions would put unarmored soldiers in very awkward positions. The first, a telescoping artillery tower, looks like a cross between a cherry picker basket and a fire truck ladder. It also looks like the perfect way to tell the enemies exactly where you are and give their snipers some great target practice – or just to easily get rid of the soldier that no one likes. Why else would you send him way up there with no armor? The helicopter cavalry idea is slightly more practical, but the men riding the personal copters still have no armor. And maybe we’re just being old-fashioned, but isn’t it a lot safer to shoot enemies from a distance rather than having to hover directly over them? 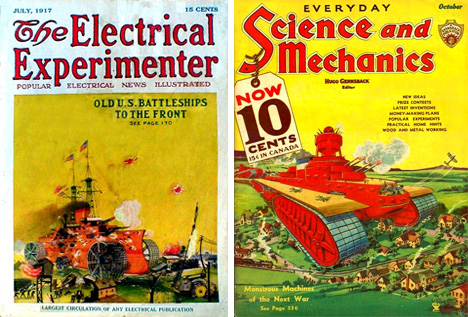 And finally, some of the silliest ideas to come out of World War I were these concepts for reusing old battleships and submarines. According to the dreamers who thought these up, you could simply strap some wheels or tracks onto old sea vessels and they would instantly become land tanks. It makes sense, in a way, since metal for building new machines was hard to come by. But given the immense size and weight of these vessels, it hardly seems likely that this is even remotely possible.

See more in Retrofuturistic or under Vintage & Retro. January, 2010.