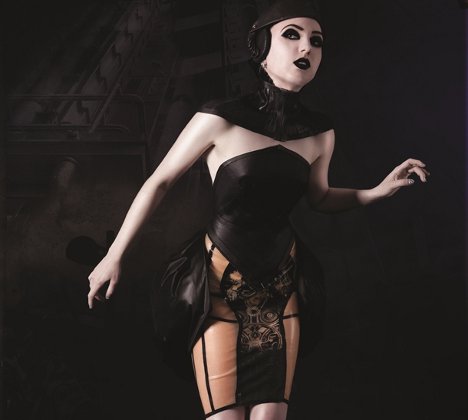 Everything seems to be going “smart” lately – so why not clothing? The Mechapolypse Dress is a mind-controlled wearable piece of technology that allows its wearer to change its shape and appearance with nothing more than concentrated brainwaves. A hat implanted with sensors detects the wearer’s level of concentration and activates features on the dress. Some of the actions performed by the dress: the overskirt moves to the sides and tucks itself behind the wearer, exposing the latex underskirt. Lights on the spine light up to mimic the rhythm of human breathing.

The dress was created by London designer Nange Magro, who has a self-confessed passion for both technology and fashion. According to the designer, some people may concentrate on math problems to activate the EEG sensors and make the dress move; others may visualize a picture or do some reading. The above video is another aspect of the Mechapolypse Dress: its entirely fictional futuristic backstory. The gorgeous short video tells a story about technology and nature existing together, then shows a bit about how the futuristic garment works.

See more in Art of Tech or under Technology. March, 2012.