10,000+ Subscribers
Free Your Hands: Game Controllers Use Your Butt + Mouth 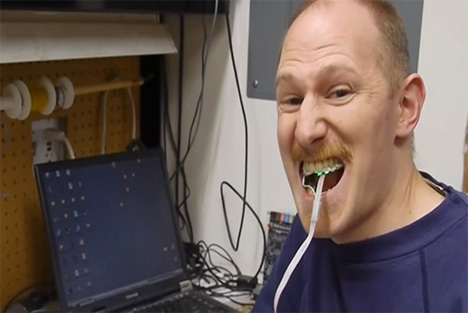 To a person who grew up playing a game with four buttons and a direction pad (like this writer), today’s games seem to have so many controls as to seem daunting. Rather than memorize all of the functions and controls in a game, you can control the action with your butt and your tongue.

The odd controllers (from Valve engineer Ben Krasnow) let you perform complex actions with a minimum of button-mashing. The butt controller works when the player shifts their weight one way or the other. The seat turns the movement into in-game commands.

The other half of the duo is the tongue controller. Players wear a custom retainer on their teeth which contains a mouse optical sensor. Using the tongue, the player steers the character around their virtual world.