10,000+ Subscribers
Feel Out a Route: Map For the Blind Has Fingers Do the Walking 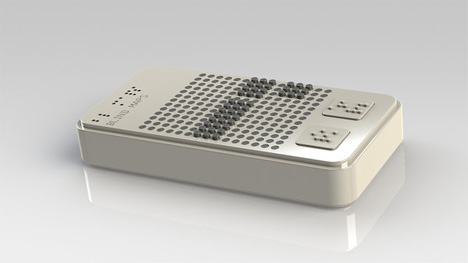 Finding your way to a new place is difficult enough, but if you take away the benefit of sight it becomes infinitely harder. Using haptic feedback in a novel way, three students at the Copenhagen Institute of Interaction Design came up with a practical concept for helping blind people get from one point to another. They called it Blind Maps, and it consists of an iPhone app and a small device that attaches to the phone physically or with Bluetooth.

The device features small metal pins that guide the user by touch to a destination. The pins raise up from the perforated surface to guide the user in the right direction. Intersections are indicated by a small gap in the pins. Obstacles or unexpected route changes can be reported and incorporated into the haptic map promptly. If a user runs into an obstacle that can’t be navigated, the device will figure out a new route at the touch of a button. 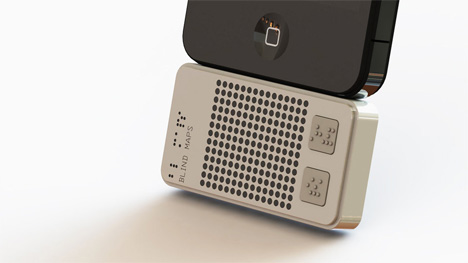 Andrew Spitz, Markus Schmeiduch and Ruben van der Vleuten created the concept during a creativity-boosting 36-hour project. Blind Maps is different from other similar navigation tools in that it uses tactile clues rather than auditory ones to guide users to their destination. This allows users to listen to their environment, a key component of staying safe in an urban setting. While the Blind Maps system is just a concept, it would be great to see haptic technology used in this way to help people get around safely.