We remember when bras did what they were supposed to and very little else. Apparently the technology age has changed that and now even our lingerie is wired, for better or worse. These two conceptual brassieres use technology to perform some high-tech (and very sexist) deeds. 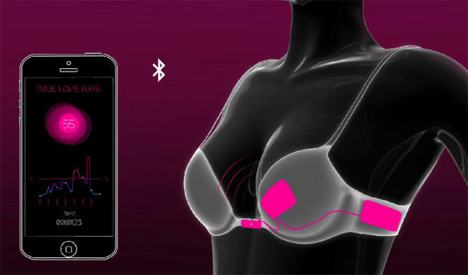 The True Love Tester bra from Japanese lingerie company Ravijour is supposed to be “a revolutionary bra that knows how women truly feel.” The bra is equipped with sensors that are supposed to recognize the wearer’s differing heart rates during a variety of activities. The front clasp only opens when the wearer experiences “true love” as determined by an associated smartphone app.

The apparent purpose of the Love Tester Bra is to keep vulnerable women from having casual flings, ignoring the fact that women are smart enough to make their own decisions. The ridiculous concept doesn’t explain what happens when a wearer runs into her true love on the street and her bra flies open – we aren’t even sure how you might get into and out of the bra every day. 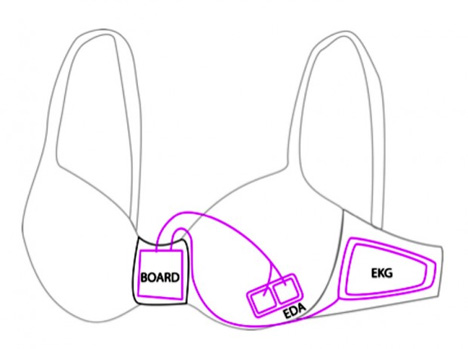 Perhaps more useful and associated with a more reputable company, this bra is meant to stop women from indulging in emotional eating. Researchers from Microsoft, the University of Southampton (UK), and the University of Rochester (NY) came together to develop a tool that would recognize and help prevent emotional eating. The bra is full of sensors that measure the wearer’s vital signs, which are then sent through an app that is supposed to determine the wearer’s emotional state.

Along with the bra’s sensors, users can rely on the smartphone app to help them stop emotional eating. The app would allow users to log their food intake and emotional states day by day, making a connection between emotions and eating. It may seem as sexist as the Love Tester Bra, but the researchers say that they chose a bra only because it rests close to the heart all day, and men don’t typically wear a similar garment. The bra and app were found to be 75 percent accurate in determining the wearer’s emotional state, but it probably won’t be put into production anytime soon.

See more in Unbuilt Concepts or under Technology. January, 2014.