10,000+ Subscribers
Eye(tooth) of the Beholder: Man Sees Through Tooth in Eye 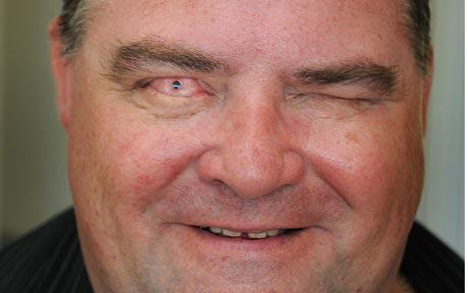 Love is blind, but one English man was recently able to see his wife of four years for the first time. After having been blinded more than a decade ago  following an accident at work, Martin Jones underwent a new procedure to restore his sight. The operation involved using a piece of tooth (appropriately it was the canine, or “eye” tooth)  to anchor a new lens held in place with a piece of his own skin. Previous attempts to restore Mr. Jones’ vision had failed, but in 2009 he was given the chance to receive this incredible new treatment at the Sussex Eye Clinic in Brighton, England. 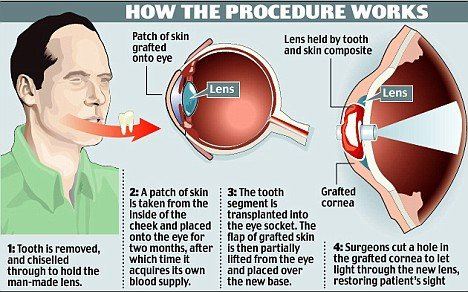 In the procedure, a very small piece of the patient’s own living tooth is removed and a man-made lens put into its core. It is implanted under the eyelid, where tissue grows over it. Then, a tiny flap of skin is removed from the inside of the patient’s mouth and implanted in the eye until it acquires its own blood supply. Finally, the tooth is embedded in the eye socket and the flap of skin secured over it, then a minute hole is cut into the new cornea to let light through. The overall result certainly doesn’t look like a conventional eye, but it has helped to restore vision to over 600 people worldwide. the procedure was recently performed for the first time in the U.S. As for Mr. Jones, the first thing he looked for when the bandages came off was the face of his wife – and he is proud to report that she’s lovely.