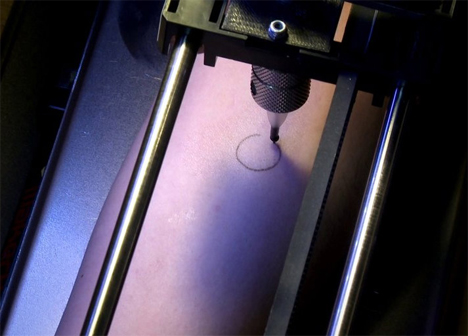 Humans are perpetually worried about robots one day taking over their jobs, but we never thought tattoo artists were in danger. French designers Appropriate Audiences made a custom attachment for a MakerBot 3D printer that turned it into a mechanical tattoo artist.

The group first used the MakerBot to create the attachment that would allow the 3D printer to perform a new trick. They installed, tweaked, and tested the automated tattoo machine. They experimented with skin tension and other variables to be sure that, when the contraption was tried out on a human, it wouldn’t horribly maim or dismember that human.

When the team worked out all of the details, a very brave member of the group stuck his arm into the machine and allowed the modified tattoo gun to permanently imprint his skin. The tattoo was just a simple circle, no doubt due to the newness and untested nature of the contraption. In the future, though, we can definitely imagine more complex tattoos being drawn by machines.

See more in Do It Yourself or under Technology. April, 2014.