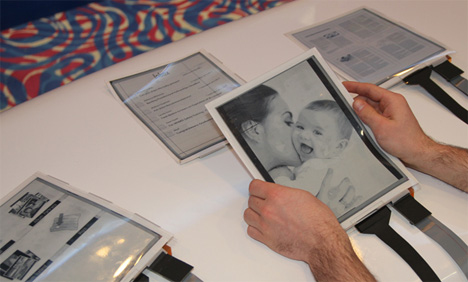 The one main drawback of tablet computers – their awkward carrying size – won’t be a problem for future generations of the gadgets. That is, if a team consisting of Queen’s University’s Human Media Lab, Intel and Plastic logic has its way. These groups came together to create a super-thin, super-flexible high resolution display that will revolutionize the way we look at tablets. As thin an as flexible as paper, the technology is known as PaperTab.

PaperTab would work much like actual paper: in groups. Each “sheet” would run just a single app, but many sheets together would give you the functionality of a traditional tablet. Of course, this might mean that you would need to leaf through your apps before you leave the house and grab just the ones you might need that day, then run the risk of being without an important one. But the technology is still in its infancy, so hopefully a streamlined and sensible method of use will emerge to make these futuristic, flexible tablets just as simple to use as the bigger, heavier ones we carry around now.

See more in Computers or under Gadgets. April, 2013.