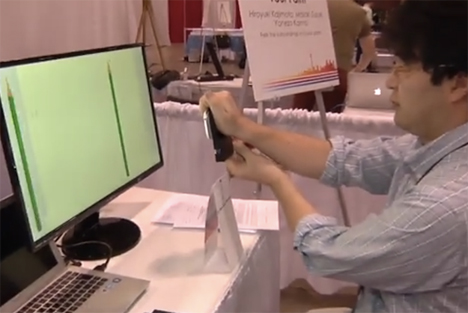 Modern technology relies mostly on sight, particularly when it comes to touchscreen devices that have no tactile input to let the user know where to touch. A research project at Japan’s University of Electro-Communications could help visually impaired people interact with modern touchscreen technology in a completely new way.

The researchers call their project Hamsa Touch. It uses the camera of a phone coupled with an electro-tactile display that converts the images into tiny tingles of electricity that tell the user what is on the screen. The tingles on the user’s palm give a map of the screen, like braille does for fingertips and text. The strength of the tingles can be raised and lowered to suit the user’s comfort level.

The device is in the prototype stage right now. The prototype uses 512 photo sensors, each associated with its own electrode. To use the Hamsa Touch, it is placed directly on of the touchscreen device to let users “see” the images via the patterns of tingles on their hands. The next step in the process is to test the product with visually impaired people to see how well it works for them and which aspects could use improvement.

See more in Unbuilt Concepts or under Technology. May, 2014.