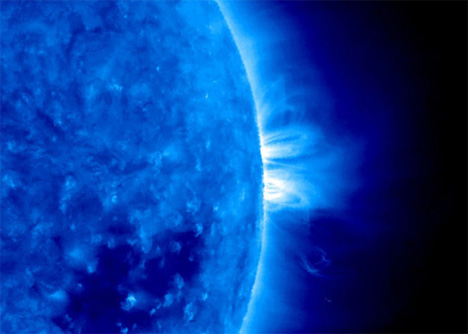 The sun, being the literal center of our solar system, has been the focus of scientific interest forever, but historically difficult to study. One of the most exciting recent missions to study the sun is STEREO, a two-spacecraft mission that captures images of the sun from two angles at once. STEREO (Solar Terrestrial Relations Observatories) has been orbiting the sun since October 2006, but won’t provide a complete spherical view of the sun until February 2011.

One of the mission’s more interesting discoveries so far has been the verification of solar tsunamis. The existence of these massive waves of hot plasma has been suspected for many years, but when they were first observed skeptics believed they were nothing more than a shadow or a trick of the eye. But in February 2009, STEREO took images of a solar tsunami from head-on and profile positions, confirming that the sun does in fact produce giant waves of plasma and magnetism. Although solar tsunamis are not a threat to Earth, they can help scientists study the sun’s atmosphere and predict when cell phone-interfering solar storms might affect Earth.