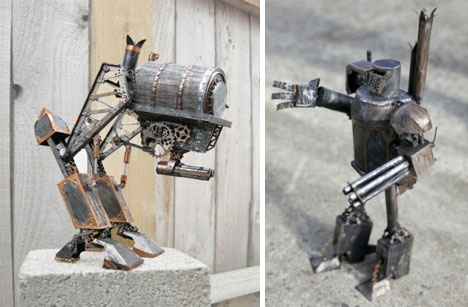 Engineer-turned-artist and designer Phillip Valdez combines papercraft and steampunk in a way that no one ever has before. His crazy creations are made of mainly paper and glue, but they look like metal and machinery. Although most of his papercraft projects are masks, his steampunk machinery-type projects are truly impressive.

Above, Valdez’s steampunk arm is made mostly of cardboard and paper. It’s held on the arm with Velcro and the fingers move with rubber bands and dental floss. The gauges, tubing and air regulators are the only “real” (that is, not made of paper) elements of the arm. 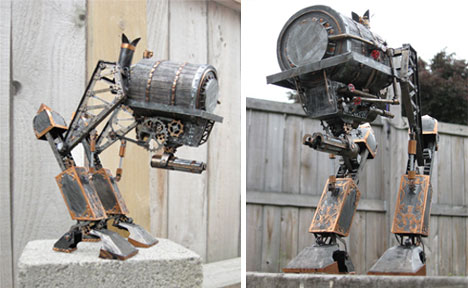 This incredible iron horse-type mechanized walker features amazing detail and absolutely no visible elements that aren’t paper. There are pennies in the feet to keep the mech weighted, but otherwise the 11-inch creation is entirely paper. If it were real, it would be a feat of engineering – but as it is, it’s a feat of artistry. 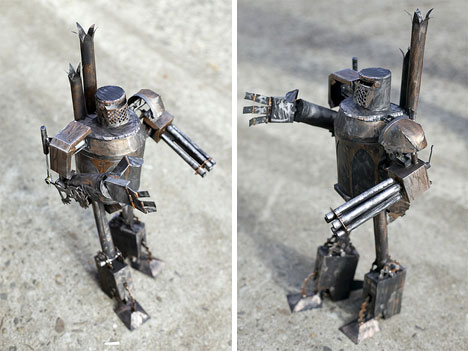 But as far as papercraft steampunk mechanized walkers go, this one is the grandaddy of them all. It was designed with an arm that doubles as a projectile weapon. Unfortunately, the arm could only be shot off once (it is made of paper, after all), but luckily Valdez captured a few photos of it before the gun arm became history.

See more in Art of Tech or under Technology. November, 2010.