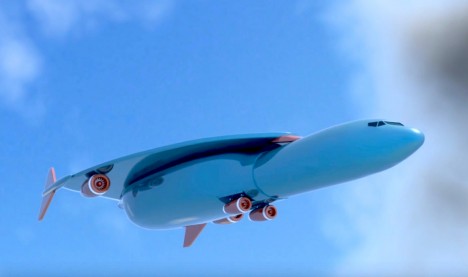 A recently-patented, rocket-powered jet designed by Airbus is akin to the classic fast-paced Concorde, but this 2.0 version blows away the latter’s Mach 2 capacity with a top cruising speed of Mach 4.5 (or: 3000 MPH, more than four times the speed of sound) at an altitude of 100,000 feet.

The jet uses a series of three engines to create a sequential set of speed boosts, maximizing acceleration and deceleration at each stage to minimize time spent during take offs and landings. Twin turbojets beneath the body and a rocket motor in the rear also allow the machine to lift off and land vertically. Hydrogen ramjets – yes, the kind used to propel missiles – get the contraption to its cruising speed and altitude. 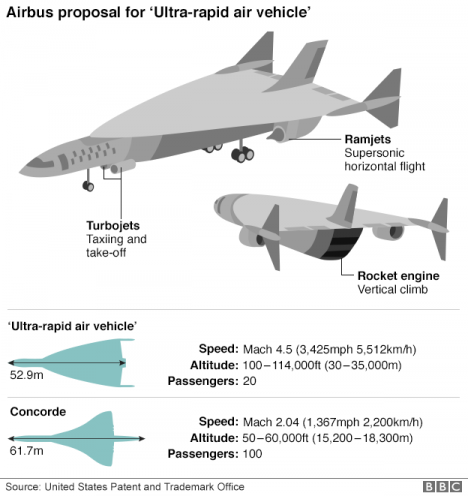 Approved by the US Patents and Trademarks Office, this fantastic flying machine could pick you up in New York City and drop you off in London just one hour later.  Of course, you’ll have to be seated in rotating hammocks on the new Concorde 2.0 to handle the forces involved. Apparently there is a plan to help the vehicle dissipate its sonic booms – the prior iteration could not reach supersonic speeds over land without having severely negative impacts for those on the ground below.

See more in Concept Vehicles or under Transportation. October, 2015.