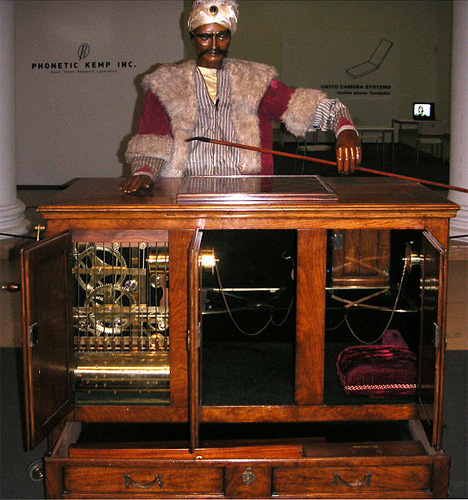 Far before there were Nigerians with money accessibility issues, there were inventors who wanted to impress royalty. Perhaps the best technology-related hoax of all time was the Mechanical Turk, a chess-playing machine that won nearly every game it played. While it was presented as an elaborate automaton, it was later revealed to be an equally elaborate fake. 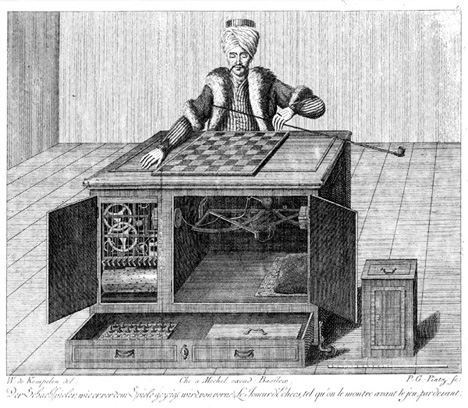 The Turk was built in the late 18th century by Wolfgang von Kempelen to win the favor of the Empress Maria Theresa. While he built the machine to outdo an illusionist who had previously performed at the palace, his own invention was little more than an illusion itself, though a very good one. The main body of the “machine” was a large box topped with a chessboard, and standing at the cabinet was a life-size mannequin of a human from the waist up, dressed in Turkish robes.

Various doors could be opened in the cabinet to show that the machinery was legitimate. Every door that was opened would reveal complicated machinery and give a view through the other side of the cabinet. All appearances indicated that the device really was a self-playing chess machine. But what viewers couldn’t see was the operator who sat on a sliding seat inside the cabinet, moving from one position to another as doors were opened and closed, always sliding into a hidden compartment while false machinery slid around to conceal him. 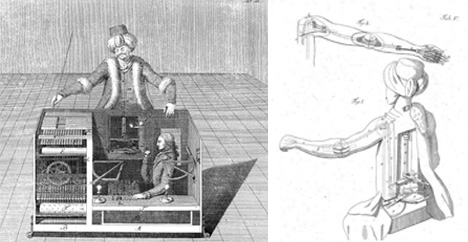 The operator inside the cabinet had to be very skilled at the game, since he was playing blindly. Small magnets on the underside of the pieces allowed pieces of string to dangle down, showing the operator where each piece was on the board. Inside the cabinet was a candle that allowed the operator to see; its smoke was vented through tubes which led out through the Turk’s turban. When the Turk made its move, the Operator activated a series of levers inside the cabinet to move the mannequin’s arm across the playing board. The Turk traveled all across Europe and eventually to America in the mid-19th century. It amazed viewers everywhere, defeating challengers like Napoleon Bonaparte and Benjamin Franklin, and even inspiring Edgar Allen Poe to write an essay on his theories of its operating secrets. 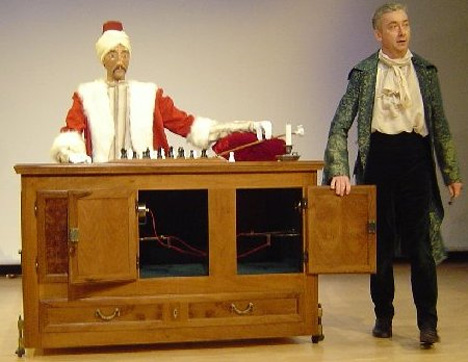 During its long life, many Turk knock-offs were constructed and also made tours, though they never became quite as popular as the original. The Turk’s secrets were eventually exposed after it was destroyed by a fire in 1854. Though the original cabinet and mannequin were lost in the fire, the original chessboard was stored separately and is displayed along with a replica constructed by American magic-equipment manufacturer John Gaughan in the 1980s. The Turk continues to fascinate audiences, though the reconstruction uses a computer rather than a cramped operator to make the chess pieces move.

See more in Antique Gadgets or under Vintage & Retro. December, 2009.