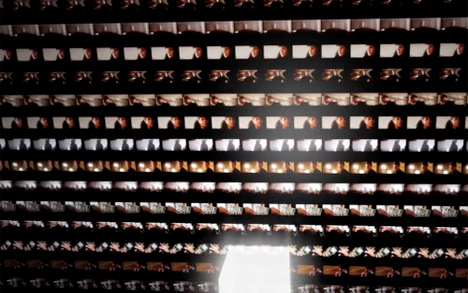 And you thought Blade Runner couldn’t get any more epic. This short film from Francois Vautier – aptly titled “Blade Runner Revisited” – takes the classic sci-fi flick and turns it into a few exceptionally dramatic minutes…leaving out, of course, the bored-sounding and distracting Harrison Ford voiceover. Vautier laid out every single frame from the movie (167,819 of them) into one huge image, then ran a virtual camera over the giant picture.

The result is an optical illusion that looks rather like many moving images, but is in fact just one very large (3.5 gigapixel) image. The movement of the camera makes it look like many separate streams of video running concurrently – kind of like an animation. These four minutes of nerdy sci-fi bliss are definitely worth turning on your speakers or plunking on your headphones for: the score is provided by Vangelis, who also scored the original movie. Be warned, though, that the little snippets of dialogue and short segments of movie scenes will probably cause an intense urge to watch Blade Runner in its entirety again.

See more in Digital Design or under Technology. September, 2010.