Science is a funny thing. There are studies being conducted every day on subjects that may seem utterly ridiculous to some people but life-or-death important to others. Such is the case with the research that resulted in the round laptop pictured above. The Roundtop is a revolutionary new laptop from a company called Revo-Round, and it is said to be the key to the reversal of a strange kind of human evolution. 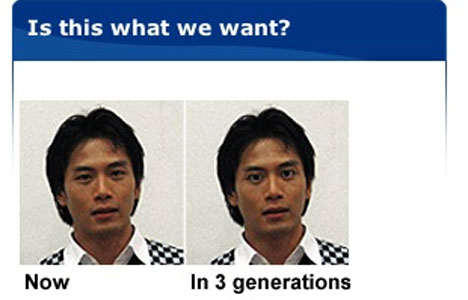 According to research conducted by Professor Zhou Hongan, Asians are evolving more “Western features” because of rectangular computer screens. The research supposes that humans with epicanthic folds are losing their characteristic eye shape generation by generation. Revo-Round says that “By today’s progress, the total population of Asia is sentenced to Western looks within three generations from now.”

Apparently, the cure for this rapid (and nonsensical) “evolution” is to replace our rectangular computer screens with round ones. The Roundtop computer looks rather like an oversized woman’s compact and contains a curved keyboard along with the round screen. The research that led to the development of this computer is weird science at its best. But this isn’t just some random group of crazy researchers and a misguided computer company coming up with weird ideas: they’ve already raised over 50 million Euros from investors.

See more in Computers or under Gadgets. October, 2010.