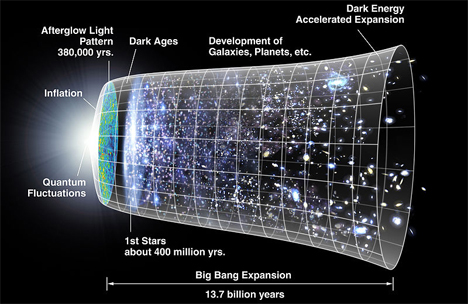 The announcement that scientists had finally detected measurable proof of the Big Bang – the very beginning of our universe – was met with awe and joy. And, for a lot of us, utter befuddlement. Gravitational waves? Cosmic inflation? Accelerating expansion? These aren’t terms that the average person immediately understands. Luckily for the folks who can’t wrap their heads around this amazing news, New Scientist made a video explaining the discovery in simple terms.

In the video above, a towel, an apple, and a ping pong ball are used to explain how scientists were able to detect gravitational waves dating all the way back to the birth of the universe. It’s heavy material, but explained in a fun way. We still don’t really get it, but that’s okay – that’s why we’re not astrophysicists.

If you need a refresher course on the entire theory of the beginning of the universe, this animation from Munich “information designers” Kurzgesagt breaks it down for you. It’s definitely worth a watch if you’ve ever wondered what happened between the Big Bang and the formation of stars and planets. Just don’t watch it when you’re sleepy, because the narrator’s voice is so soothing you’ll drift off to his explanations of hydrogen gas and plasma. Not that we know from experience or anything.

See more in Science Fiction or under Science. March, 2014.