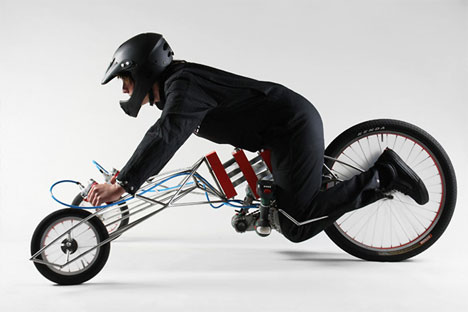 To a certain point, eccentricity is what drives innovation. Nothing new ever came of doing the same old thing forever. And that’s why, even when a new design looks totally insane, we’re all about supporting the people brave enough to put those ideas out there. The Ex trike (“ex” as in “eccentric”) is definitely insane-looking but also just cool enough to make us totally wish we had one. 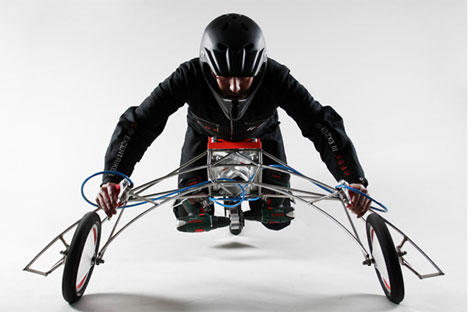 Designed by Nils Ferber in cooperation with Sebastian Auray, Ruben Faber and Ludolf von Olderhausen, the Ex looks like a mean racing machine and is powered by two electric screwdrivers which can accelerate the driver up to about 16 MPH. The driver lays in a downward-facing position with arms outstretched, putting him in a terrifying configuration not far from the pavement below. 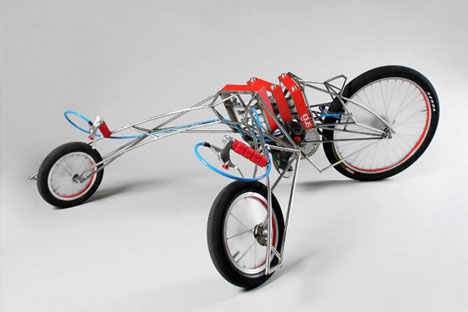 Steering is done not with handlebars, but with the driver’s body. He twists his spine and moves his lower body to change the vehicle’s course. The interaction of human body with machine is a recurring theme in this design: the appearance of the trike was meant to recall a human skeleton and its exposed organs. It kind of looks like that’s what the rider will become with just a small wrong move on this danger machine, but that’s the kind of excitement that gets the blood pumping.

See more in Mods & Custom or under Transportation. March, 2011.