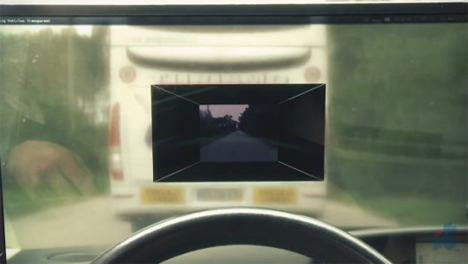 Driving on any kind of expressway or interstate system is frustrating when you seem to be constantly stuck behind huge trucks and can’t see what’s ahead. A team from the University of Porto in Portugal has come up with a novel – and somewhat complicated – system for alleviating the nervousness and danger of driving behind large vehicles. The See-Through System involves installing forward-facing cameras on large trucks and transparent LCD screens on cars. The screen would be built right into the windshield and would not have to be engaged at all times.

But when the driver finds him/herself driving behind a truck or bus and wants to know if it’s safe to pass, the screen will effectively allow the driver to look directly through the larger vehicle to see what’s ahead. It isn’t a perfect system just yet. There is a 200 millisecond delay in the video feet, which sounds negligible but actually causes oncoming cars to look a bit further away than they actually are. The See-Through System seems like one of those good ideas that will forever go un-marketed due to its complexity, but the concept is intriguing and will no doubt be studied in more detail. Perhaps it will even work its way into our cars in the future.

See more in Unbuilt Concepts or under Technology. November, 2013.