Solar panels are traditionally flat, and there’s a problem with that: they can only catch some rays from one angle. If they are to get the maximum amount of sunlight throughout the day, they need to track the sun’s movement in the sky and readjust their positions which, of course, takes electricity. Therefore, the ideal way to generate solar power would be to maximize the usable surface area of the solar panel. MIT power engineering professor Jeffrey Grossman thinks he might have the perfect way to do that. 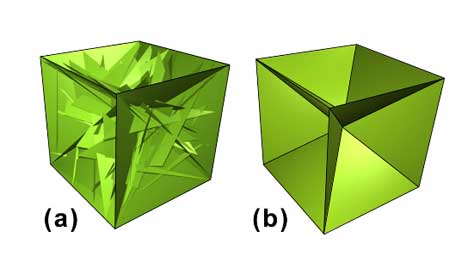 For inspiration, Grossman looked toward trees: they spread their leaves in every direction to ensure they get as much sunlight as possible. Then he and a graduate student went to work developing a computer program that would use the principles of evolution to “grow” the most efficient solar collectors possible. The results were these strangely beautiful origami-like structures with multiple surfaces.

These folded designs are about two and a half times more efficient than flat solar panels, and they can produce energy throughout the entire day while staying stationary. Some of the shapes created by the program were so complicated that they would be impossible to produce in the physical form, so the team simplified them. Grossman believes that these efficient solar panels could be shipped to their destinations flat, then simply folded out once they’re in place. The team is continuing their research and gearing up to produce a prototype.