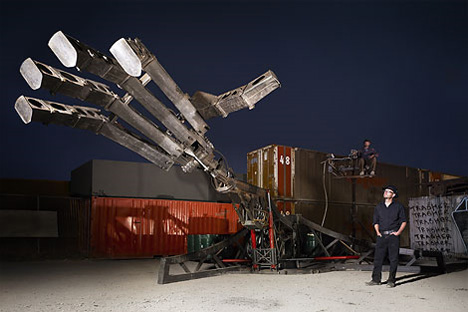 Christian Ristow has been building robots for years, but he got the feeling that he was having more fun than the people watching them perform. So he decided to build something that everyone would love. His interactive sculpture “Hand of Man” was introduced at Burning Man 2008, and it allowed Ristow to not only entertain the crowd, but to get them involved in something that he calls “a quick shot of therapy.” The piece is a gigantic humanoid hand and forearm, powerful enough to lift a car, and according to Ristow, operating it is liberating.

The hydraulic, diesel-powered contraption is operated by a lightweight glove controller. The controls are so simple and intuitive that anyone can walk up and put their hand into the glove and begin operating the 25-foot tall robot immediately. In fact, he allows audience members three minutes on the control couch to experience the awesome power of controlling a larger-than-life crushing machine. 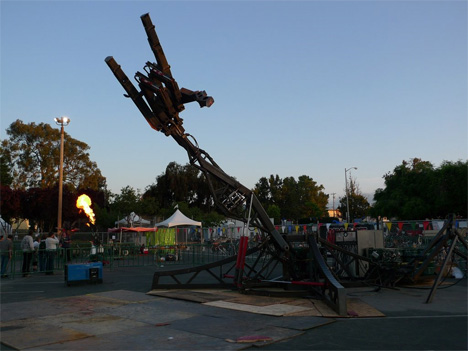 While the hand wasn’t in top form on its first appearance at Burning Man, Ristow has worked tirelessly since then, between public appearances, to improve and refine its operation. It’s able to pick up a small car – or a barrel, or any other easy-to-grip object – and drop it again, smashing it to bits. The robot offers the audience a very real chance to wield the kind of awesome power most people don’t usually get to play with.