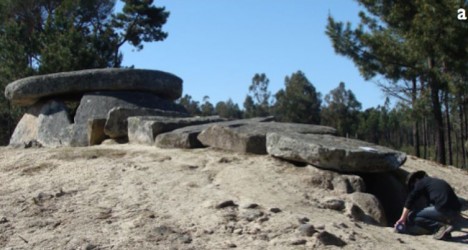 Cosmological myths, legends and superstitions of of our ancient ancestors were often tied to astronomical phenomena, and now researchers have found a truly stunning tool they used to make observations of these celestial happenings.

In the absence of modern magnifying glasses and reflective mirrors, the structure discovered in Portugal employed a lower-tech approach: a narrow passage filtered out extraneous light, helping people see stars at times when they would be hard to spot in the open sky.

Part of a prehistoric tomb complex called the Seven-Stone Antas, the astronomical observation device is thought to have been used to view Aldebaran, a red giant in the constellation of Taurus. This star becomes visible in the early morning s of spring, just before sunrise, but would be hard to see outside of a narrow window without a device to block out unwanted night. In turn, its passage was presumably used to mark a change of seasons from spring to summer.

More from the scientists behind the discovery and their next steps: “The team’s idea is to investigate how a simple aperture, for example an opening or doorway, affects the observation of slightly fainter stars. They focus this study on passage graves, which are a type of megalithic tomb composed of a chamber of large interlocking stones and a long narrow entrance. These spaces are thought to have been sacred, and the sites may have been used for rites of passage, where the initiate would spend the night inside the tomb, with no natural light apart from that shining down the narrow entrance lined with the remains of the tribe’s ancestors.”

See more in History of Tech or under Vintage & Retro. August, 2016.