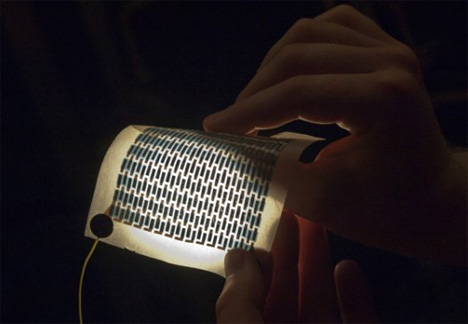 As much as we’d like to see solar panels everywhere and on everything, they have always been somewhat costly, bulky and uncompromising. A team of engineers at MIT is developing solar cells that can be printed onto a piece of paper with a technique similar to 3D printing. The five layers of material are laid on the paper one at a time in a vacuum chamber, using a method similar to the one used for lining potato chip bags with foil. The manufacturing method is significantly less involved than the one needed for traditional rigid solar cells, but the big advantage of this new breakthrough is that the cells can be folded over and over without losing functionality.

The photovoltaic cells work just as well when printed on thin plastic as they do when printed on paper. The MIT team went so far as to fold one of the paper cells into a paper airplane and, one of the plastic cells was folded over a thousand times. Both cells still functioned normally. Although they are incredibly robust, they aren’t quite miracle power producers just yet: their initial efficiency is a sad one percent. But if the team can improve the efficiency of the lightweight cells, they could revolutionize consumer electronics batteries and make electricity plentiful in developing countries.

See more in New Materials or under Science. July, 2011.