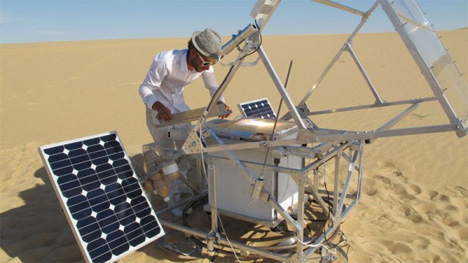 We really are only just beginning to harness the power of the sun for fueling our lives. Sometimes we forget, though, that solar power is good for more than just juicing up homes and businesses via huge solar panels. Industrial designer/genius inventor Markus Kayser built a 3D printer that uses sand and the power of the sun to print in glass. 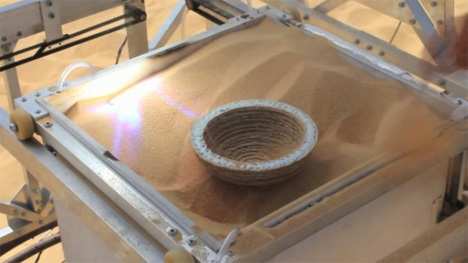 Glass occurs in nature; when a bolt of lighting strikes silica-rich sand, for example, natural glass is formed. Kayser’s invention simply takes glass and sunlight – the two most abundant resources in desert areas – and uses them to create incredible glass objects. The project explores the possibilities of using only readily-available natural resources to create new objects in a time of growing concerns about the continued availability of both energy and raw materials.

Using a process nearly identical to the one used in other 3D printers, Kayser’s Solar Sinter uses concentrated sunlight to melt sand layer by layer into the desired form. Where other 3D printers employ lasers to melt resins, Kayser’s desert setup could potentially keep printing almost infinitely with no electricity. To prove the effectiveness of his machine, he conducted two weeks’ worth of testing in the middle of the Sahara. Part of his experiment is documented in the video above.

Kayser also demonstrated his Sun Cutter, a low-tech version of a laser cutter that makes precise cuts with just concentrated sunlight. The material being cut is moved around on a cam-guided system (solar powered, naturally) while a ball lens directs the ultra-powerful beam of sunlight that cuts through plywood, paper or cardboard. Kayser used the system to create some awesome-looking plywood sunglasses. 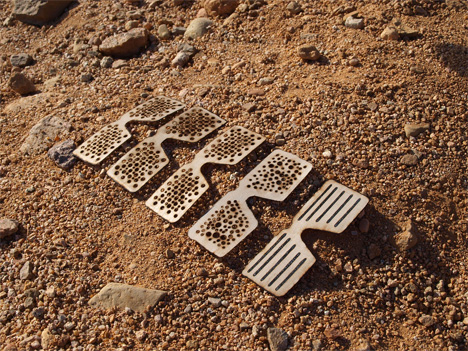 Although there is a definite scientific explanation for each of these processes and results, Kayser’s inventions seem closer to magic than to science. We would love to see more inventors go this route and find exciting sustainable answers to the questions surrounding how we’ll keep up with our increasing demands for energy and materials.

See more in Industrial Design or under Technology. July, 2011.